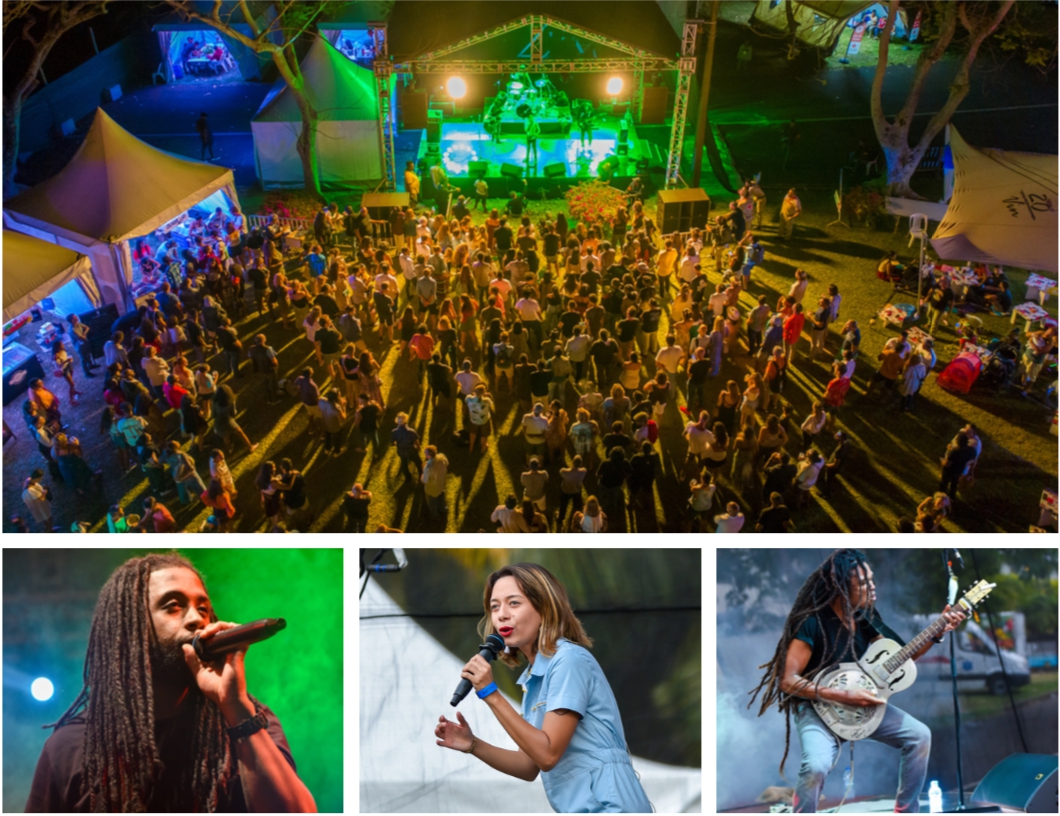 Thanks to the Lively Up team created by Lionel Permal and Laura Hébert, we can proudly say that Mauritius has not been left apart from this amazing worldwide trend. In 2013 the team launched the Kaz'Out Musik Festival. What’s in a name as one would ask? ‘Kaz’ in creole (Mauritius mother tongue) means home. The philosophy of the festival, is to encourage people to go out from home for discovery - hence the name Kaz'Out.

Kaz’Out has now become one of the most awaited music festivals in Mauritius and one of the few to come back every year. Since its first edition at the Eureka House in Moka; a site in the heart of nature and full of history, the festival has continued to grow, improve and enrich its musical line-up.
There was indeed some uncertainty about the 7th edition whether it would be possible to host the festival or not, but fortunately for us the team has succeeded in adapting to the current worldwide situation to propose to us a quality show this year as well. 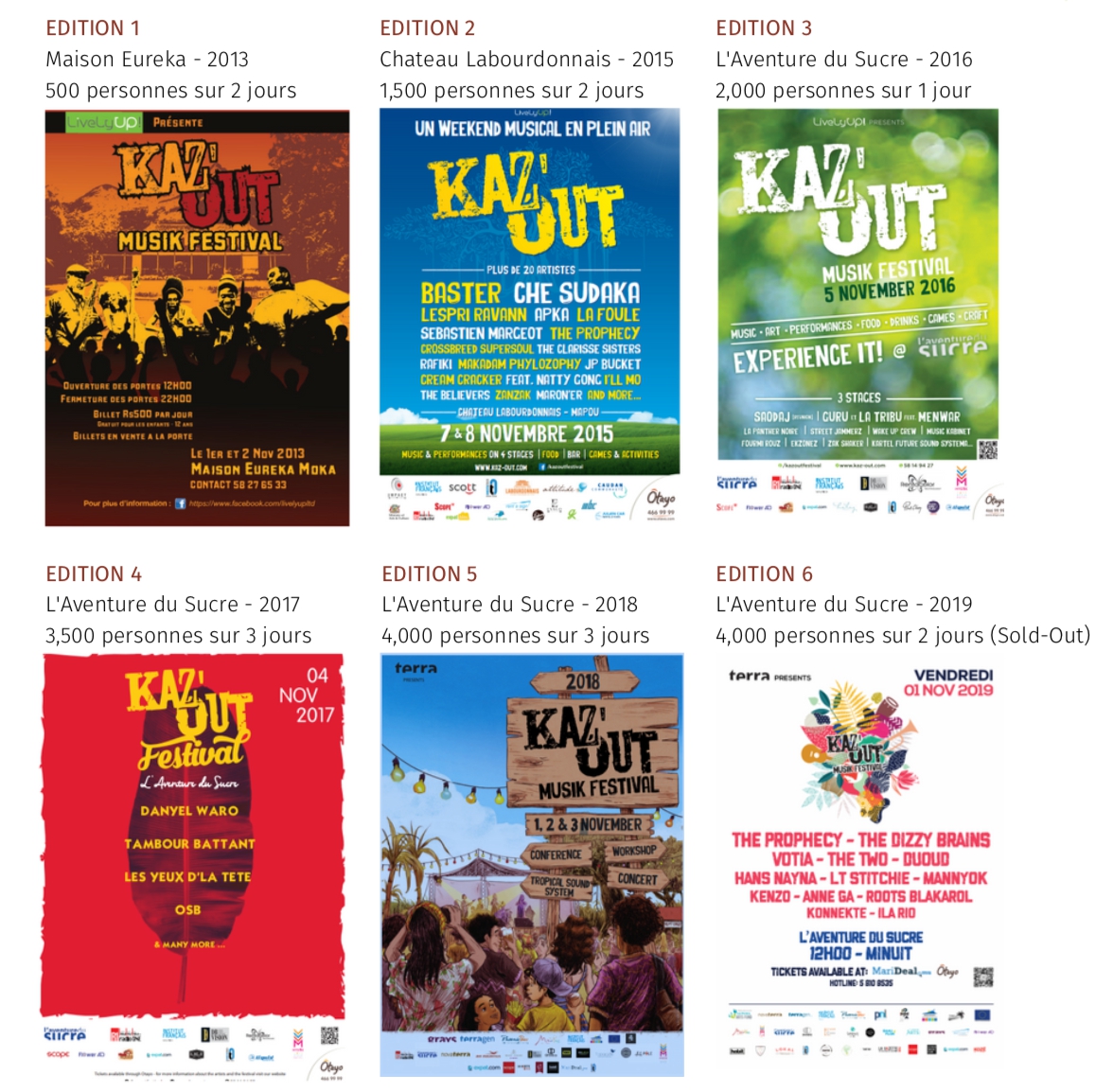 Kaz'Out is the story of a team which decided to "think out-of-the-box" and have managed to install a culture around the festival across the different editions. The team started the festival with the idea of ​​developing something of a new genre, highlighting artists coming off the beaten path. It is an invitation to celebrate who we are in our diversity and uniqueness at the same time.

Lionel Permal, being an artist himself; he has been the co-founder of the well known group ‘Blackmen Bluz’ in the past, knows well about the difficulties of those who go off the beaten path to be able to find a platform to present their music. Kaz'Out Musik festival is here to offer, over a weekend, several concerts of both confirmed artists and beginners with a real stage personality in an amazing venue with a beautiful decor. The objective of Kaz’Out is to encourage encounters between the artists and the public, and make the latter discover a wide variety of musical styles.

The variety of genres proposed during the festival is a clear invitation not to be locked in a pre defined box. The aim of the festival being also to bring together quality, discovery and diversity and we have seen it throughout the years. We still recall the first edition which was 100% local with the performance of Mauritian artists only. As from the second edition the festival has broaden its horizon bringing in artists from other parts of the world. It lives up to its vocation of inviting the public to broaden its musical horizons and open up to each other in a spirit of respect and sharing. Kaz’Out is also the opportunity to see on stage the pioneers of the Indian Ocean music. This year's edition will be an opportunity to get back to the roots with a 100% local act (as during the 1st Edition) .

The philosophy of the festival is a fusion of “out of your house” and “out of the box”. The desire of the organisers not to limit their choices and to welcome/ explore all musical avenues has created a colourful/an exotic cocktail of genres over the different editions:

What’s even more interesting about the festival is that it is kids friendly. Apart from the musical stage, the festival provides access to games, jams, exhibitions, workshops, etc. which now attracts thousands of cosmopolitan festival-goers of different age. It gives the opportunity to small local creators to showcase their products during the festival and gain more visibility. The small gathering that it was at its first edition has now turned into a great platform for exchange, discovery, meetings and sharing in a warm and friendly atmosphere.

With all that's been happening this year, it is undeniable that we have all become much more aware of the importance of food cultivation, therefore Kaz'Out found it interesting to have small workshops for adults on gardening, water harvesting, permaculture, discussion on example of self-sufficiency, community garden during this year's edition.

For some years now, the team also use the platform to sensitize the public attending the festival about environmental causes. How? By giving the example on the site of the festival and by proposing fun activities around particular themes with the help of the Kaz'Out Conscious Crew.

To prevent food wastage after the festival, Kaz'Out has partnered with FoodWise Mauritius to collect unsold items from the different food stands which are willing to participate in this initiative. FoodWise Mauritius will be responsible for collecting and redistributing the food to associations in the north which help families in difficulty. Foodwise will also propose different activities and demonstrations to festival-goers to sensitize the participants on food wastage.

This year the Festival also wants to help the families who have become vulnerable following the sinking of the Wakashio in the southeast of the island, by collaborating with the non-profit organization Eco-Sud. The team encourages all those who wish to be present on the day of the festival to make a DONATION through the purchase of their ticket. Rs50 on each ticket purchased will be directly donated to families on the south east coast, in difficulty, if you click on the option 'Ticket + Don Wakashio'. Tickets are available on sale online https://maumenu.com/kazout

The brand Kaz'Out, which as you have seen is a 100% local one is attracting more and more interest and many partnerships have developed around the festival to create a very interesting synergy.

One thing that music festivals have always done, and will always do, is bring people together. In the end, it's still and always about the music. So save the date for this year 2020, the 7th edition of the Kaz’Out festival will take place on the 07th & 08th November with the main site at L’Aventure du Sucre. The scenes of the festival remain identical to previous editions with:
Kanbar
Kaz'Apero
Dan Vilaz
Silent Party

Get your groove on and let’s meet in November at Kaz’Out!